I spent Easter in Bremen, a stately Hanseatic city on the River Weser. It is stately in another sense too: it is also the smallest of Germany’s 16 federal states/Länder, and one of only three city-states, along with Hamburg and Berlin.

The idea of the trip occurred to me in November, as I was performing Brahms’ German Requiem in my choir. The first performance of (almost) the full Requiem took place on Good Friday, 1868, in Bremen’s St Petri Cathedral. So I figured there might be a 150th anniversary performance in Bremen in 2018. And so there was.

It was a performance with a difference. I had been vaguely aware that the programme included the first performance of a modern work: Spiegelungen (“Reflections”) by Ali Gorji, an Iranian now living in Germany. This hadn’t surprised me, as the Requiem is a bit too short to fill a concert. What I hadn’t realised was that the movements of the Brahms Requiem would be interspersed with those of the modern work.

This idea isn’t as revolutionary as it might appear. The 1868 performance in Bremen included arias from the Messiah and Bach’s St Matthew Passion by the contralto Amalie Joachim, accompanied by her husband Joseph on the violin. And there’s at least one modern precedent, in Wolfgang Rihm’s set of orchestral interludes for the Requiem.

The pairing of Gorji and Brahms worked well for much of the concert. While the Requiem is probably my favourite choral work, my first impression many years ago – before familiarity dulled the edges – was of almost too many climaxes. Its unremitting intensity can almost overwhelm the listener, particularly in a live performance. Interpolations can provide space for each of the movements to breathe, and to be more fully digested before the next “course”.

Ali Gorji’s music – settings of an Iranian poem by Mehdi Akhavan-Sales, Story of the Stone City, in which a city has been cursed or bewitched – had an ethereal, almost mystical quality which was well-suited to this purpose. The only point where the interruption didn’t work was between the final two movements: it dissipated the tension of Brahms’ 6th movement (“Death, where is thy sting? Hell, where is thy victory?” followed by a majestic fugue), detracting from the sublime solace of the Requiem’s finale.

The other unusual aspect of the concert was the use of space. My seat seemed to be right at the front, and I was sinking into a reverie in which I was Clara Schumann, getting ready to observe her Johannes at close quarters … until I realised the conductor, orchestra and choir were behind me, out of sight in the gallery. In front of me, in the body of the church, was the small ensemble for the Gorji interludes, and soloists paced the aisles in the dark.

Once I’d got over the disappointment of not being able to imagine myself as Clara, it turned out to be rather an atmospheric arrangement, and focused the mind on listening to the music rather than being distracted by what the choir and soloists were wearing. But I’m not sure whether this was a deliberately contrived effect or simply the norm in Bremen Cathedral: they were up in the gallery behind me again on Easter Sunday morning, singing a Bach cantata.

The art of bricks

One of the unexpected delights of Bremen is its brickwork. Some of the municipal buildings are reminiscent of Copenhagen’s City Hall, familiar from series 1 of The Killing. But the use of brickwork as an art-form was, at least to me, strikingly original.

From my hotel window in the old town, I had views of two examples of “brick expressionism”: 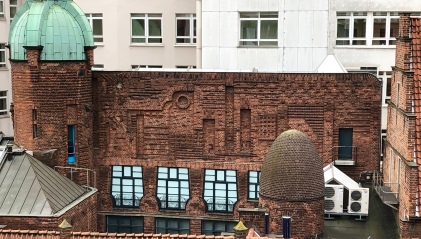 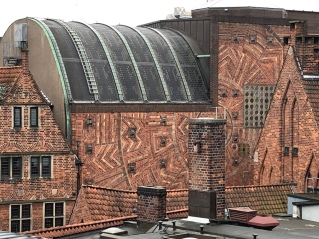 The first of these is part of the Paula Modersohn-Becker museum, built in the 1920s. The second may also be part of the museum and in any event is on the same street, Böttcherstrasse, designed in the 1920s – though to my eyes it looks more recent. As with any relics of the Weimar period, there is a dark side: the buildings were funded by a coffee magnate, Ludwig Roselius, who had Nazi sympathies. But the brick-work itself was denounced by the Nazi government as degenerate art.

There’s also a more recent example of brick expressionism just behind the Rathaus: the Bremer Landesbank. This one is remarkably contemporary – finished in 2016 – though its appearance suggests the mid-20th century.

Looking at the Landesbank, I was struck by the similarities between brickwork and knitting: 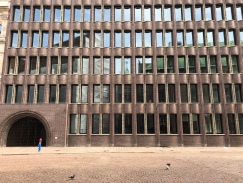 the patterns created by protruding bricks remind me of the textures created by knit and purl stitches, and the bank’s vertical columns evoke ribbing. And beyond the visual resemblance, there’s an architectural similarity between fashioning buildings from bricks and garments from stitches. As I tweeted in the Ratskeller after the concert, the challenge of building a smooth vaulted roof out of bricks is akin to knitting a smooth armpit …

I had, of course, decided to eat at the Ratskeller because that’s where Brahms celebrated with Clara and other friends, after the success of his Requiem. Next year will be the 200th anniversary of Clara’s birth, so I’ll be off to Leipzig.

2 thoughts on “Bremen, Brahms, and the art of bricks”